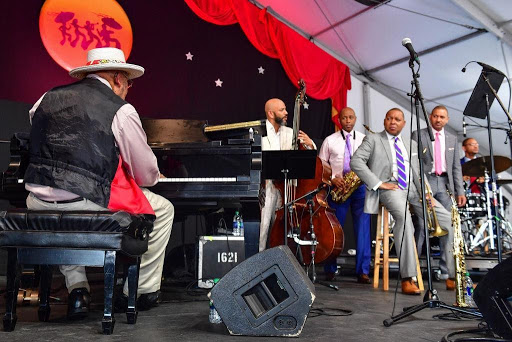 Posted at 08:00h in Insights by Jenia Espe

Preamble: I learned about jazz from my father – a Soviet engineer who designed a new generation of cockpits for the Ilyushin planes. He also was an amateur musician. He would practice piano (which was originally purchased for me: no use came out of that) – and most of what he played was jazz. That’s how I was introduced to the world of Louis Armstrong, Oscar Peterson, Duke Ellignton and Dave Brubeck. Jazz in the Soviet Union was politicized, and the most concerted attempt to crush jazz came after World War II. My father was 5 years old when the War ended.

I don’t think I’ve ever heard my Dad to play a jazz song exactly the same way. He always improvised and built on the previous note. “In jazz, a note is neither right nor wrong. It’s the note that follows that will make the difference.” Want to create a culture of innovation in your organization? Short of forming a jazz band, try to encourage idea building and improvisation. Great music can be created that way.

2. You have to really listen:

Instead of interrupting and campaigning for your own idea, musicians have to play together and listen to each other. You can’t just wait to insert your (amazing) solo: you have to built on what others have “said” before you. “Listening, particularly active listening, is simultaneously a skill, an art form and, most importantly, a discipline.”

3. Everybody gets to lead and play:

In a jazz ensemble, everyone leads … for a certain amount of time. Then they step away and giving the spotlight to other band members. This idea of shared leadership really needs to be better adopted in the business world.

Here is a great blog that goes with this idea!

How to jump-start innovation and creative problem-solving on my team?

Our training engagements run the gamut.  A local Chamber of Commerce recently asked us for recommendations for a follow-on course to their highly successful leadership training.  The result? A 9-month, advanced executive training seminar that emphasizes the importance of creative thinking for leadership.

If a shorter engagement is more of your style, we’ve got you covered. A local non-profit wanted to develop a social media strategy but wasn’t sure where and how to start.  We designed a three-hour facilitation session that brought together employees from across the organization to generate ideas and build consensus.

From college students to senior executives, our customized courses combine classroom learning with dynamic, hands-on activities to keep participants engaged, energized, and ready for more. We have developed training curricula for several Fortune 500 organizations, non-profits, and institutions of higher learning. These are just a few examples of the courses we offer:

Whatever the size of your organization, we can meet your training or team-building goals.

Believe it or not, creativity can be taught.  Our customized curriculum has:

Vary from a few hours to a few days

How to improve the employee experience during a major transition

A large regional bank had recently acquired a smaller bank, and the leadership team wanted to make the transition as easy as possible for its new employees. After all, exceptional customer experiences start with great employee experiences.

The merger involved a major technology conversion, and the top priority was to make the technology section of corporate intranet intuitive and easy to navigate.  Mergers are stressful enough–employees don’t need the added frustration of a complicated Intranet page.

Technology projects are often designed and implemented by technologists.  But this time, the Bank put its employees in the driver’s seat, involving them in every step of the process.

We developed a research strategy that combined employee interviews and workplace observation to uncover employees’ needs. We also performed an organizational analysis to identify similarities and differences in the corporate culture of the two organizations. With these insights in hand, we redesigned the IT information architecture and created a temporary transition page that put the most critical work tools at employees’ fingertips.

Research doesn’t have to break your budget.  We are happy to customize a research plan to meet your unique needs and build a better employee experience.

The transition was a non-event, which is exactly what it should be.  Employees were able to easily access critical job tools and effectively navigate the transition.

A key factor in the successful transition was the fact that employees felt that their voices were heard, and more importantly, that their feedback was incorporated into the final product.

How to develop and implement a customer-centric strategy?

A financial services company in New York wanted to become more customer-centric by adopting a life event approach for their contact center. The problem was they didn’t know where to start.

For this project, we used customer interviews and existing research to find the sweet spot where business and customer needs intersect and used it to design a new customer experience strategy.

Using their existing data, we identified the four life events with the highest customer and business impact. Then, we developed a segmentation framework to identify the key customer segments for each life event.

The next step was research. We conducted 30 in-depth interviews with current clients to understand their perspective on the life events–specifically, what they were thinking, feeling, and doing at each stage.

How to build a world-class CX team that delivers tangible results?

A newly appointed Director of Customer Experience was charged with setting up the CX function in his organization. He had a talented team, but none of the members had a background in customer experience. We had to help him develop a new future state experience and make sure that his team was prepared to carry the vision forward.

We believe in sharing what we know. We planned the engagement so that the CX team could shadow us during every step in the process, from conducting customer research to leading customer journey mapping sessions. In addition, we created customized training materials to help the team learn best-in-class CX tools and techniques.

We put those teachings into practice right away and the team worked with us to create customer experience future state journey maps and service blueprints.

By the end of the engagement, the team members were able to:

How to benchmark the current customer experience?

A regional bank with 32 branches made Customer Experience a strategic priority. They called us to help them figure out how to start their journey to customer-centricity.

The organization had a vision; we helped them turn it into a plan. Working  with key stakeholders and SMEs in the organization, we reviewed the current customer experience, including:

We provided a detailed analysis of how their experience stacked up in relation to other regional banks and the financial services industry more broadly.

With this knowledge in hand, we helped them identify quick wins and longer-term experience opportunities consistent with their branding and strategic objectives.

How to design products for Millennials?

A Fortune 500 life insurance company was struggling to develop products to appeal to affluent Millennials.

The best way to develop new products is to get a thorough understanding of what your customers want and need.  In this project, we conducted in-depth, contextual interviews with newly affluent Millennials in two markets, Austin and Washington, DC.

We sat down with customers in their homes to collect rich data about what they like and don’t like about life insurance, as well as their financial goals and attitudes toward money. These interviews formed the basis of customer personas and generated key insights about customer needs.